I am also screening mosquito pool samples collected in the field for human pathogenic viruses, insect specific viruses as well as other microbes using qRT-PCR, conventional PCR and microarray in collaboration with the Lawrence Livermore National Laboratory.

Risk of disease introduction in the US

In this collaborative effort funded by the Department of Homeland Security, we want to investigate the risk of introduction and transmission of Rift Valley Fever virus, Japanese encephalitis virus, Venezuelan encephalitis virus (VEEV), and African swine fever viruses (ASFV), Heartwater (Ehrlichia ruminantium) to be transmitted in the continental U.S. I am focusing on VEEV, ASFV and Heartwater diseases.

Virus Evolution
During my postdoctoral studies, I investigated the evolution of dengue 4 (DENV-4) in Puerto Rico. My study shows that DENV-4 evolves in Puerto Rico through lineage turnover. Since its introduction in 1981, DENV-4 has evolved in three different groups with each group evolving from rare variants from the previous group. I also found that each group was characterized by specific mutations and that DENV-4 evolves in Puerto Rico as a result of the combination of purifying selection and genetic drift. 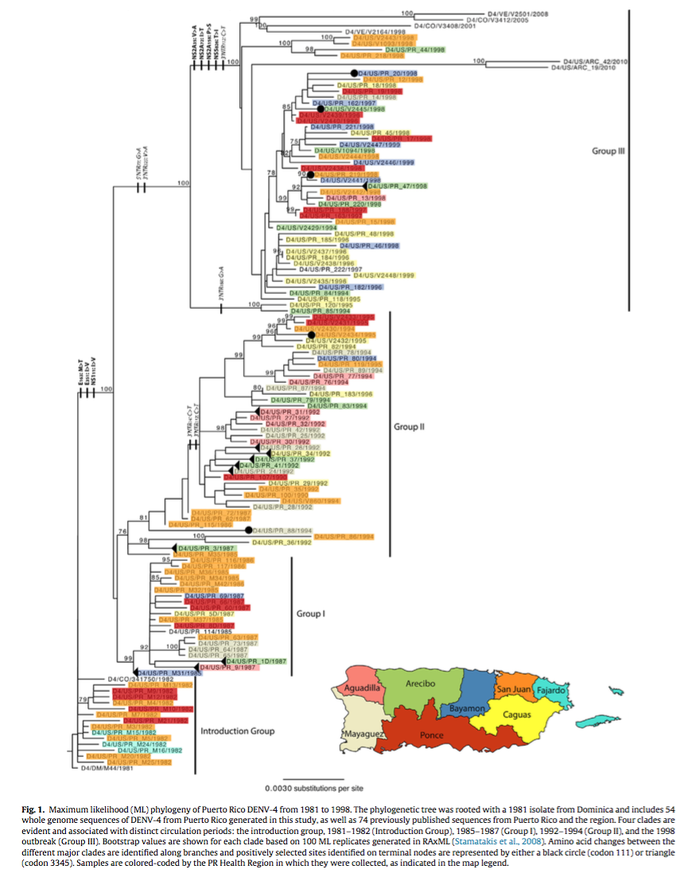 Vector competence and risk of disease emergence
I also developed a research project to investigate the role of Ae. albopictus in dengue transmission. Specifically, my project focuses on the role of Ae. albopictus in places where Ae. aegypti  (the main vector) is absent. In this regard, Hawaii was the perfect environment to do so as Ae. albopictus is the most abundant Aedes species and was involved in the 2001 Hawaii dengue outbreak. Recent results show a limited vector competence of the local mosquitoes to DENV-1 that could explain the small size of the epidemic. I also initiated the first study looking at the consequence of DENV-1 infection on the secondary vector Ae. albopictus.

Virus Evolution and disease transmission
I was involved in understanding the epidemiology of chikungunya virus (CHIKV) during its emergence in the Indian Ocean region in 2005. During the explosive outbreak that hit Reunion Island, a mutation from Alanine to a Valine in the envelope glycoprotein (E1) of the virus occurred. I carried out research on the susceptibility of Aedes aegypti  (Ae. aegypti) and Aedes albopictus (Ae. albopictus) towards the two CHIKV isolates and demonstrated that the mutation resulted from an adaptation to the Ae. albopictus mosquito vector. I also investigated the consequences of infection by CHIKV  on Ae. albopictus and Ae. aegypti vectors and have identified a diminution in survival and fecundity in the Ae. albopictus vector.
The epidemic of CHIKV in Reunion Island was preceded by a DENV outbreak in which Ae. albopictus was also the incriminated vector. We  have demonstrated the ability of Ae. albopictus to deliver both viruses in its saliva.
The appearance of CHIKV on Reunion Island was the first emergence of CHIKV in a French territory. The virus quickly spread to the Indian sub-continent and to South East Asia. The virus reached Italy in 2007 raising the possibility of introduction in France.  We assessed the risk of CHIKV outbreak in South France showing high susceptibility of mosquitoes from Camargue and Alpes Maritimes to transmit CHIKV.
While studying CHIKV epidemiology, I was also part of a collaborative effort to understand the mosquito response to CHIKV. First we identified immune pathways involved in the Ae. aegypti mosquito vector following CHIKV infection. In this study I took advantage of a loss of function technique that I learned during my training at the Pasteur institute and at the European Molecular Biology Laboratory to show the key antiviral role of the RNA interference pathway in the response to CHIKV.
In another study we show that although the Wolbachia endosymbiont did not have a high impact on the replication of the virus, it directly competes with the virus for resources in the Ae. albopictus mosquito vector. Both studies demonstrate the need to develop new strategies to fight vector borne diseases by engineering mosquitoes resistant to human pathogens.